We agreed in the previous article from the series “The Knowledge of Adam,” that Satan has tools and aides from the demons of mankind and the jinn, including (influential personalities, media and science).

I will not hide a secret from you, as I was confused as to what to start with, as each element is nothing but a thorny gate that is difficult to penetrate, and in the end I decided to start with the easy one, which is the (influential personalities).

The focus was on the soft building block of society, and they are the children because they are the next generation, and the men of tomorrow. It was necessary for Satan to direct his helpers from the devils of mankind and demons of the jinn, to control the minds of these children, in an effort to change their identity.

And since Satan knows that identity has elements, he focused on distorting those elements in children, and the most important is the “symbols” element, such as important historical figures, and making them integrate into the cartoon films that the child loves. 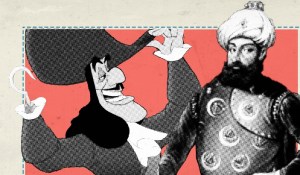 All children know who Barbarossa is, but it is false knowledge. If you ask any child: Who is Barbarossa?

His answer will be: He is a pirate, a thief and an evil one.

With this mental image that was implanted in the child’s mind, a distinct historical image of a brave man named “Khair El-Din Barbarossa”, the hero who helped Algeria against Spain, was able to liberate the African coasts from the Spanish occupation and saved the Muslims of Andalusia, was distorted, as he assumed the mandate of Algiers, then the Sultan appointed him “Suleiman the Magnificent” the task of the Ottoman fleet, so he left to his son “Hassan” the state of Algiers, and history bears witness to him for his courage in the Islamic conquests.

That is why Satan decided to manipulate the identity of the child, so he, through his followers, distorted symbols in the same way as distorting a character like Barbarossa.

And Satan made some of the characters that have the ability to influence the child and adolescent in particular, making them public figures with power, fame and money, and made them appear as Hollywood stars.

And Satan used them as a tool to implant in them customs and traditions that contradict the nature upon which God created us.

He decorated the bullying for them as if it was courage, and made chaos into a doctrine of objection and vibration of the country’s stability, and concealed from them that the correct approach is the need to develop a conscious plan to achieve stability and development, instead of demolition and bloodshed.

And everyone should come back to God’s warning to us, as he said,

“O you who believe, wine and gambling, idols and divining dice are an abomination from the work of Satan, so avoid it, so that you may be successful. Satan only wants to cause enmity and hatred between you in wine and gambling and prevent you from the remembrance of God and prayer.

God has taught us that Satan adorns people with wine, gambling, idols, and arrows, because its result is enmity and hatred, and in the end, blood, and this is one of the goals of Satan until he reaches these people to disbelief in God.

And for the rest of the talk…

The chain and science of Adam(4) Lucifer