“The Knowledge of Adam” series (1)

When God created “Adam” from the earth’s human being of different elements and colors, and made him in his image as a human, “God” told the angels that he would create a caliph on the earth “when your Lord said to the angels, ‘I will create in the earth a successor. Neither condemnation nor rejection of the command of God Almighty, but it is surprising that God will return to the earth a creature who will corrupt and shed blood.

And they wished that he would make them, meaning the angels, God’s successors on earth, to glorify Him and sanctify Him, Glory be to Him, the Most High, but God, the All-Knowing, the Wise, said to the angels: “I know what you do not know.” Surah Al-Baqarah verse 30.

“And He taught Adam all the names, then showed them to the angels, and said, “Inform me of the names of these people.”

Here, God teaches us in his wisdom that everything is easy for what he was created for. The angels created them to glorify and to be messengers from God to the universes of which the earth is.

As for “Adam” he created him for worship like “jinn”, but God honored “Adam” to be God’s successor on earth, and He taught Adam all the names, and here we see that those names are similar to the “collections of words” from which he elicits and infers and through which the human mind determines every development of those names. which God taught Adam.

Then God presented the names or the meaning of the names so that they would inform God of them, so the response was, “Glory be to you, we have no knowledge except what you taught us, for you are the All-Knowing, the Wise.” Surah Al-Baqarah verse 32, if all the names or their meaning that God taught to Adam have wisdom and function, they will be subject to Adam and his offspring.
Throughout the life of the world.

And because the element from which God created the angels illuminated me, they had no choice but to obey God’s command for them to prostrate to Adam.

As for “Iblis” who lived among the angels, he was arrogant and was overpowered by his fiery temper. “He was from the jinn, so he disobeyed the command of his Lord.” Surah Al-Kahf, verse 50.
On the pretext that he is better than him because Adam was created by God from clay, while Satan was created by God from fire and he has special qualities and great abilities that differ from the formation of Adam.

“Lord said Vonzerna to the Day of Resurrection, you said theorists, known to the day time, he said, I will surely companions, but slaves of them loyal,” Al-mores verse 14

…and for the rest of the talk… 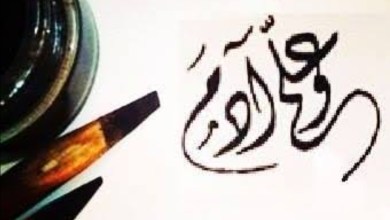